Yan Slobodkin, a postdoctoral researcher at SIFK, recommends four books in this month's edition of Four Things. Yan is a historian of modern Europe, with a focus on French colonial and transnational history. In the fall he will be a lecturer on History & Literature at Harvard.

The Twittering Machine by Richard Seymour

After a year and change of nonstop zooms and minimal meatspace working and socializing, the first book I reached for when I finished my last remote class of the quarter was The Twittering Machine by Richard Seymour. Readable and engaging as well as insightful and erudite, it combines history, philosophy, and media theory in a unique way. The book complements Shoshana Zuboff’s hefty 2019 book The Age of Surveillance Capitalism, but focuses less on technical and economic mechanics and more on the psychological costs of our networked world. Seymour’s pessimistic picture of social media can at times seem too relentless – new connections and new conveniences surely aren’t all bad, and in any case, the cat is out of the bag. But I certainly came away with a greater self-awareness of my relationship to my devices, and the need to be more intentional in how and when I connect. (Order The Twittering Machine from Seminary Co-op)

In the Forest of No Joy: The Congo-Océan Railroad and the Tragedy of French Colonialism by J.P. Daughton

At a time of profound global inequality in care during Covid, the continuing impact of the European colonial empires of the 19th and 20th centuries has never been so clear. This book by Stanford history professor (and my doctoral advisor) J.P. Daughton is an accessible, humane, and harrowing account of the construction of the Congo-Océan railroad in interwar French Equatorial Africa. At a cost of around twenty thousand African lives, this little-known tragedy embodied the contradiction between European civilizing ambitions and their human costs at its most stark. The book is meticulously researched - I found myself riveted by the detailed descriptions of the working and living conditions of the people who unwillingly toiled on this reckless and deadly project. I was also fascinated by how cruelty could so easily coexist with a rhetoric of liberal humanitarianism that we continue to rely on as a bulwark against suffering. (Pre-order In the Forest of No Joy from Bookshop)

Discourse on Colonialism (1950) by Aimé Césaire

Revisiting Césaire’s 1950 essay for my course “Violence and the State” reminded me of the beauty of his language, but also gave me a new appreciation for the prescience of his vision of the world and his fears for the future – a future we are now living. Whether or not one accepts the alternatives of socialism or barbarism, his analysis of colonialism as a symptom of deeper problems in western culture is worth thinking about. In particular, the idea of the “boomerang effect,” in which the ill effects of colonialism rebound on the colonizers, continues to provide a provocative framework for understanding contemporary developments in Europe and the United States including the rise of the antidemocratic right, the withering away of welfare states, and the role of police violence. This is a text that offers insight far beyond its historical context. (Order Discourse on Colonialism from Seminary Co-op)

The academic humanities offer many intellectual rewards, but it’s a hard way to make a living. For the frustrated many vying for the increasingly few permanent jobs, the situation now looks more like that of artists or musicians than that of previous generations of professors, a passionate calling rather than a path to a middle-class existence. Many humanists are forced to look elsewhere for a reasonable salary, health insurance, geographic stability, and professional dignity. Christopher Caterine’s book Leaving Academia: A Practical Guide helps face up to this new normal. The practical information Caterine offers to academics who have only the haziest sense of other professional worlds is very welcome. At least as important is Caterine’s advice on managing the fear, shame, and grief that can accompany the loss of one’s self-conception as an academic. (Order Leaving Academia from Bookshop) 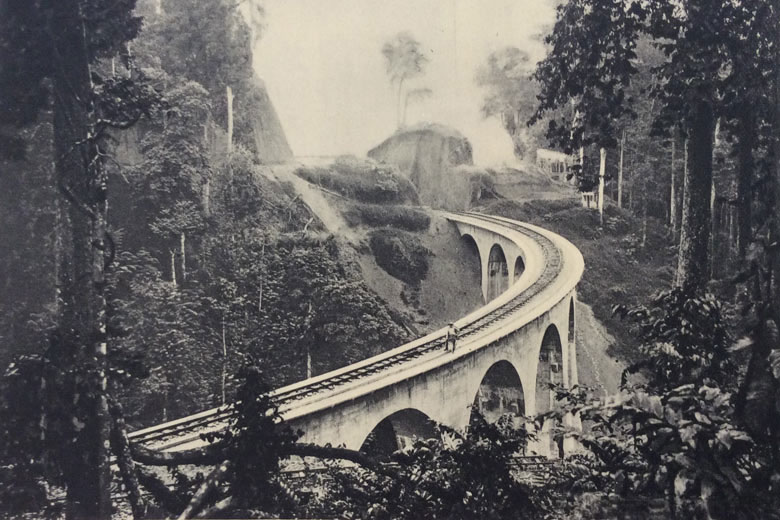 An early photograph of the Congo-Océan Railroad.