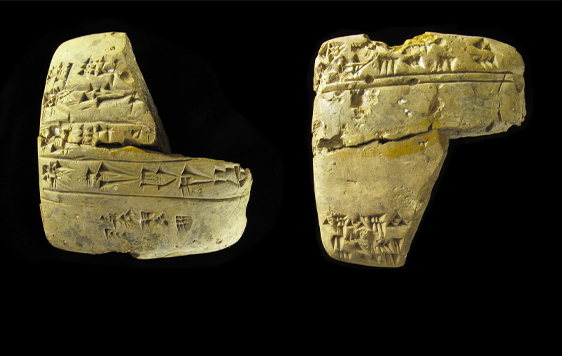 Babylonian Knowledge and the Challenge of History

About the Author: Dr. Eduardo A. Escobar, SIFK Postdoctoral Researcher, is a historian and Assyriologist whose research focuses on cuneiform scholarly cultures of the ancient Middle East. In Autumn 2017, Escobar will teach an undergraduate course titled "Babylon and the Origins of Knowledge." For more information about Eduardo's and other SIFK courses, visit http://sifk.uchicago.edu/courses/2017-18/

"There are two kinds of ways of looking at mathematics, which for the purposes of this lecture I will call the Babylonian tradition and the Greek tradition." With those words Richard Feynman contrasted Greek (Euclidian) axioms and Babylonian mathematics, which he characterized as an attitude that lacked axioms altogether:

The Babylonian attitude—or what I call Babylonian mathematics—is that you know all of these various theorems and many of the connections in between, but you have never fully realized that it could all come up from a bunch of axioms...the Babylonian idea is to say, "I happen to know this, and I happen to know that, and maybe I know that' and I work everything out from there. Tomorrow I may forget that this is true, but remember that something else is true, so I can reconstruct it all over again..."1

In that same lecture he would go on to say that "in physics we need the Babylonian method, and not the Euclidian method," that "[w]e must always keep all the alternative ways of looking at a thing in our heads; so physicists do Babylonian mathematics, and pay but little attention to the precise reasoning from fixed axioms."2 Feynman was famous for his work in quantum mechanics; he was not an Assyriologist (nor did he claim any deep knowledge of cuneiform cultures). Yet his claim remains a compelling appropriation of the ancient past. Feynman, the modern physicist, Feynman, former member of The Manhattan Project, envisaged his predecessors not as Greek, but as Babylonian. That was in 1965.

Fast forward to the present. August 2017 news cycles have once more pit Babylonian and Greeks mathematicians against the timeline of history. "How the Babylonians beat Pythagoras by 1,000 years" exclaimed one headline;3 others left poor Pythagoras unnamed, but were quick to suggest that the cradle of civilization was also the birthplace of trigonometry:

One would be forgiven for believing, given these titles, that the tablet—known by its unromantic catalog number Plimpton 322—was freshly unearthed from the sands of Iraq. In fact, Plimpton 322, a 19th century BCE cuneiform tablet containing Pythagorean triples, has been known and studied for nearly a century. In 1922, George Plimpton bought the tablet from Edgar J. Banks, a well-known peddler of antiquities. Plimpton later bequeathed the tablet, along with other historical mathematical texts to Columbia University in the mid 1930s.7 Assyriologists have long laid to bed the argument that the tablet preserves evidence of trigonometry.8 And there is little reason to rehearse those arguments here, particularly given Evelyn Lamb's recent takedown, appropriately titled "Don't Fall for Babylonian Trigonometry Hype."9 I concur with Lamb, and echo Eleanor Robson, who has argued, repeatedly, that cuneiform mathematical texts are historical documents that cannot be divorced from their local contexts. Math does not develop as a pure system of knowledge in isolation, hermetically sealed from social forces, including economy and religion.

Robson's (2008) Mathematics in Ancient Iraq situates Plimpton 322 within the landscape of cuneiform scholarly cultures from the early second millennium BCE (known to specialists as the Old Babylonian Period). These clay tablets still preserve the fingerprints and teeth marks of young Babylonian school children, who trained in households of elite families. Their training involved everything from sign lists, to model contracts, and math exercises. A rare glimpse at their interdisciplinarity comes from a school tablet from the city of Nippur (southwest of Babylon), which preserves both a Sumerian literary excerpt dispensing pedagogical advice and a brief calculation of a regular reciprocal pair.10 The Oriental Institute at The University of Chicago owns one such hybrid tablet, A29985, which reads "A wretched scribe, the most backward in the school!" a colorful Sumerian proverb, again followed by a mathematical calculation:

School texts from Nippur and other Old Babylonian sites eventually became construction materials, lumps of clay reused to patch as walls and flooring. (Those clever Babylonians, they even invented recycling before the Greeks.)

Old Babylonian mathematics addressed the practical needs of accounting, land surveying, and metrology, but culturally, it was tethered to larger concepts numeracy, literacy, to the ideologies of kingship, art, and to a mathematical conception of justice. Sumerian and Akkadian terms for "justice" (niğ2-si-sa2 and mīšarum respectively), were semantically related to making a thing "straight" or "square."11 It does not make sense to speak of trigonometry in Babylonian mathematics because, to put it simply, that is not the way Babylonians framed their numerical knowledge. Furthermore, there is no evidence that it featured in the development of architecture as the most recent study of Plimpton 322 has conjectured.12 If our goal is to discuss trigonometry in the context of architecture, we can turn to documents from the later Islamic intellectual tradition.

Trigonometry thrived within the religio-cultural contexts of Islamic astronomy from the 9th century onwards, but only in the thirteenth century did it develop into an independent discipline separate from astronomy.13 Ahmad Dallal, in his (2010) Islam, Science, and the Challenge of History, recounts a fascinating episode in the history of mathematics. It involves Al-Tājūrī, a 16th century timekeeper and religious scholar, who questioned why the mosques at Fes, in Morocco, were directed towards the south (following the literal interpretation of a ḥadīth), and not towards the legal qibla (the eastward direction of Mecca).14 To accurately calculate the qibla from Fes, one needed to account for the curvature of the Earth, one needed spherical trigonometry. What followed was a series of debates between jurists and astronomers, that illustrate how research—scientific, religious, architectural, or otherwise—requires negotiation between epistemic and cultural authorities. No field of knowledge develops in isolation and not even trigonometry is pure.

Importing modern concepts into the ancient past is perilous, not just from a historiographical or epistemological perspective, but from a practical one as well. Sooner or later we risk losing sight of the fact that our historical subjects, whether Islamic scholars, Greeks, or Babylonians are fascinating precisely when they're not like us. Popular descriptions of Babylonian scientific knowledge have a tendency to take Nietzsche’s cold bath approach: quickly in, quickly out. But what if, rather than describe these ancient subjects by the measure of Greece, or modern mathematics, we made an effort to linger just a bit longer in the cuneiform cultures of ancient Nippur, Larsa, and Babylon itself, i.e., the 19th century BCE that contextualizes Plimpton 322? That same period also contextualizes the Law Code of Hammurabi, liver omens, flood stories, Sumerian creation myths, the Epic of Gilgamesh, and the growth of Akkadian as a scholarly language. In that period, science and the humanities, historians and mathematicians, were not—as C.P. Snow would later decry—members of two distinct and opposing cultures. Scribes were ṭupšarrū, and their object of research—whether mathematics, literature, extispicy, or lexicography—was simply "knowledge," nēmequ. It is only within this strange admixture of disciplines that we can hope to encounter something distinctly unfamiliar, a "Babylonian attitude" as Feynman called it.

There are two kinds of ways of looking at Babylonian knowledge: the first way is presentist—it imports the present into the past; the second way is contextual—it translates and localizes knowledge from cuneiform documents and material culture. While the latter is more rigorous and requires years of training in cuneiform cultures and historiography, it would be a mistake not to acknowledge that the two ways of looking at knowledge are interdependent. Presentism is here to stay, and there are no axioms historians can use to neatly rediscover the realities of the ancient past. But fret not: Babylonians are here to intervene, to challenge our explanatory tendencies with their own styles of knowing, and, if provided the chance, defamiliarize how we envisage the construction of knowledge itself.

"Escobar, Eduardo. 2017. Babylonian Knowledge and the Challenge of History, September 08, 2017. Formations, The University of Chicago. https://sifk.uchicago.edu/blogs/article/babylonian-knowledge-and-the-challenge-of-history/"

———. "The Plimpton Collection and the Early History of Mathematical Assyriology." In Mining the Archives: Festscrift for Christopher Walker on the Occasion of His 60th Birthday, edited by Cornelia Wunsch, 245–92. Dresden: Islet, 2002.

7 See Eleanor Robson, "The Plimpton Collection and the Early History of Mathematical Assyriology," in Mining the Archives: Festscrift for Christopher Walker on the Occasion of His 60th Birthday, ed. Cornelia Wunsch (Dresden: Islet).

13 Our modern trigonometric functions (sines, cosines, and tangents) are owed to 9th century scholar Ḥabash al-Ḥāsib, who first implemented those functions in his Al-Zīj al-Dimashqī. 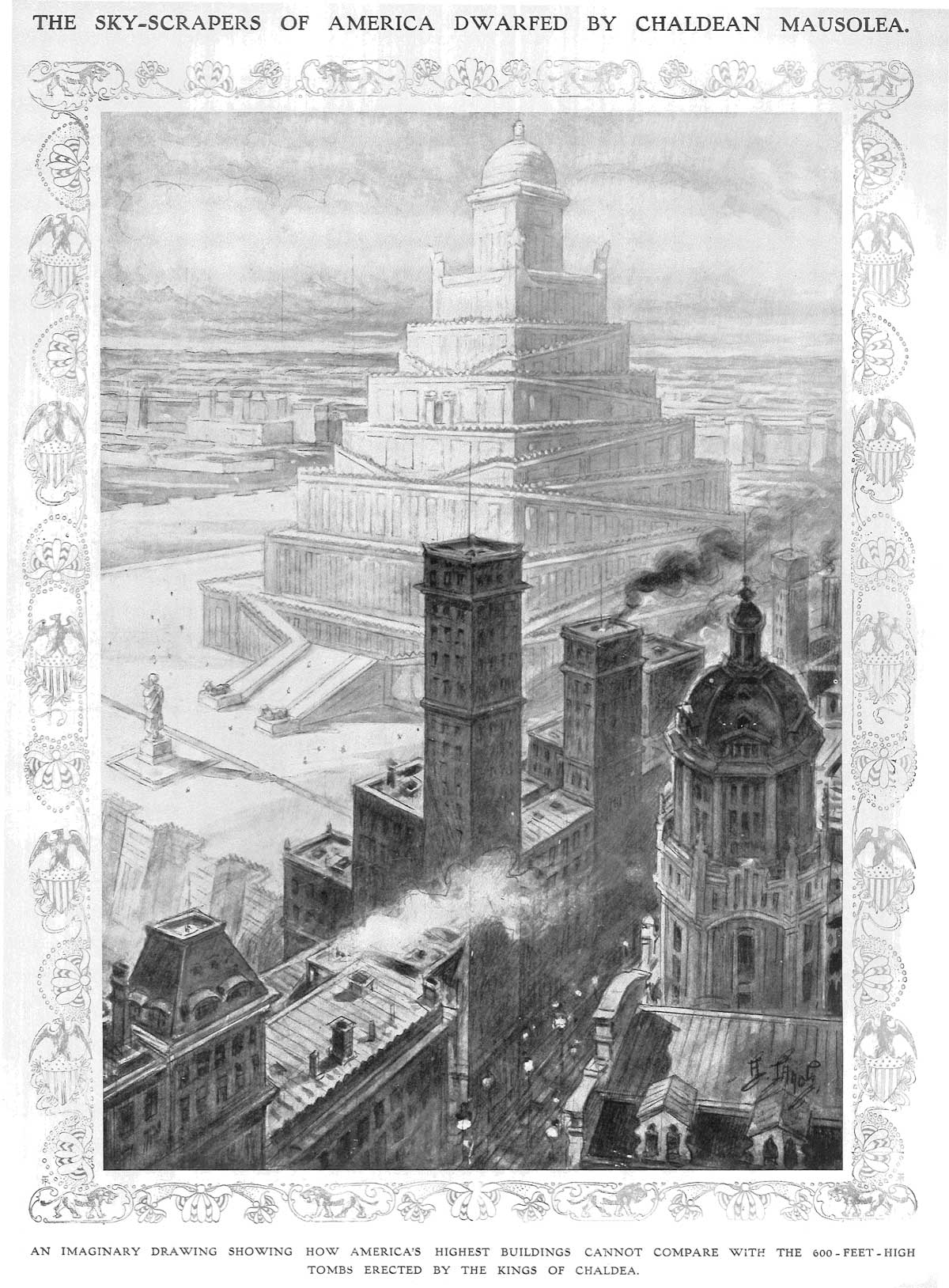 From The Illustrated London News, Aug. 6, 1910. The caption reads: "An imaginary drawing showing how America's highest buildings cannot compare with the 600-feet-high tombs erected by the kings of Chaldea" 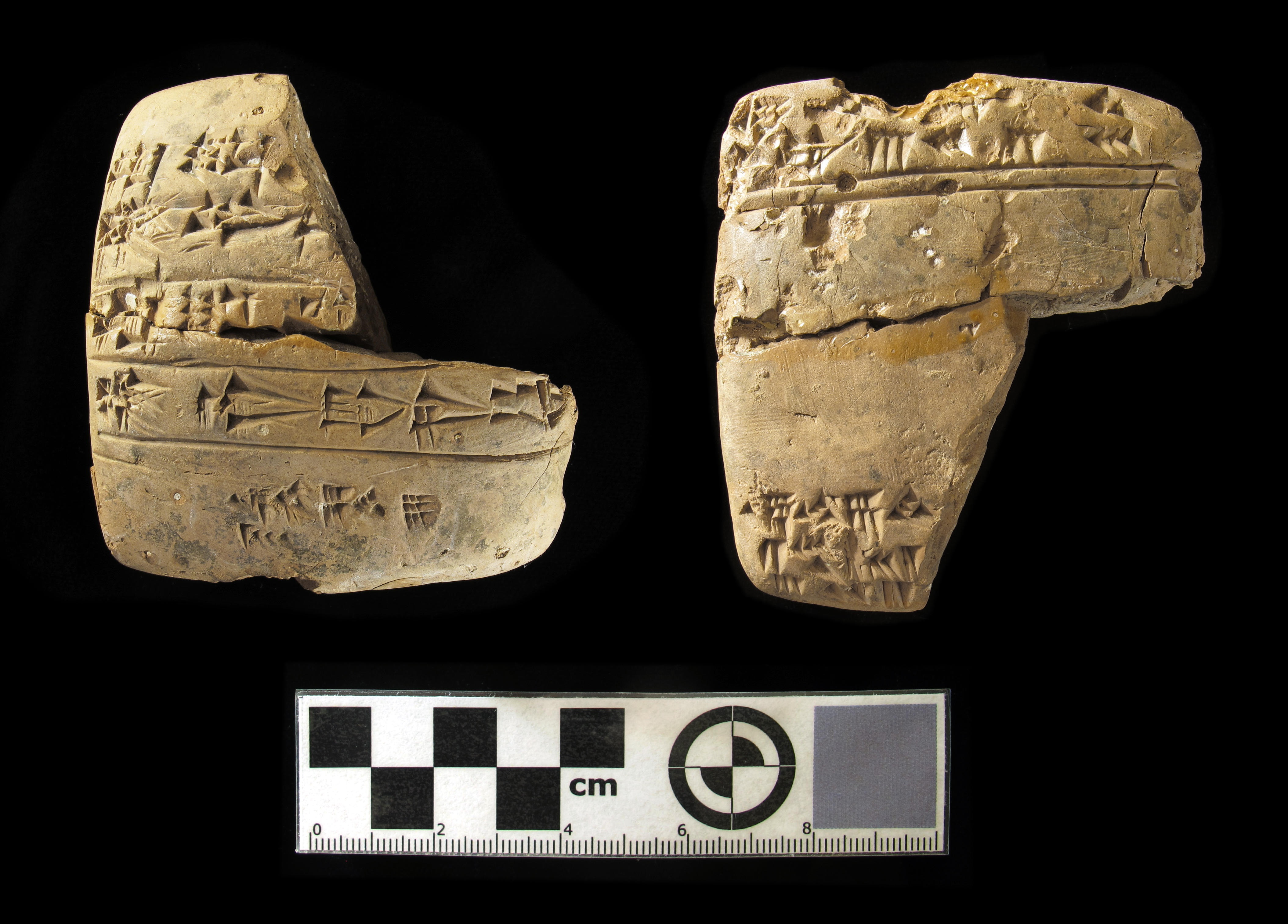