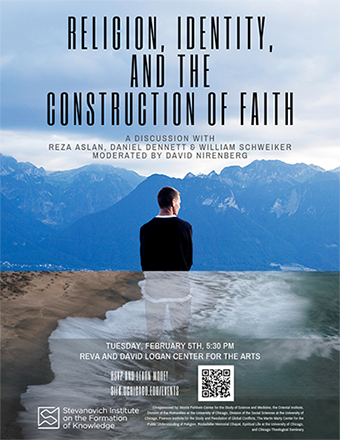 The Stevanovich Institute on the Formation of Knowledge invites you to a discussion about the past, present, and future of belief. Join award-winning writer and commentator Reza Aslan (author of Beyond Fundamentalism), controversial philosopher of science and culture Daniel Dennett (author of Breaking the Spell: Religion as a Natural Phenomenon), and respected religious ethicist William Schweiker for a conversation that will take the long view on religion as a human enterprise: its history, its power, and its prospects. We hope to bring believers, critics, and everyone in between into a productive—and provocative—dialogue about the place of faith in our changing world.

Religion, Identity and the Construction of Faith will be moderated by David Nirenberg, Interim Dean of the UChicago Divinity School. The discussion will be held at the University of Chicago’s Reva and David Logan Center Performance Hall on February 5, 2019. Doors open to the public at 5:00 p.m.; the event will run from 5:30-7:00 p.m., with a reception to follow.

Award-winning titles by these acclaimed authors will be available for sale by the Seminary Co-op Bookstore in the lobby of the Logan Center Performance Hall from 4:30-7:30.

Reza Aslan an internationally renowned writer, commentator, professor, producer, and scholar of religions. Recipient of the James Joyce Award, Aslan’s books include Zealot: The Life and Time of Jesus of Nazareth and God: A Human History of Religion. His first book, No God but God: The Origins, Evolution, and Future of Islam, has been translated into seventeen languages, and was named one of the 100 most important books of the last decade by Blackwell Publishers. He is also the author of Beyond Fundamentalism: Confronting Religious Extremism in a Globalized Age, as well as editor of two volumes: Tablet and Pen: Literary Landscapes from the Modern Middle East, and Muslims and Jews in America: Commonalties, Contentions, and Complexities.

Aslan is a tenured Professor of Creative Writing at the University of California, Riverside, and holds a PhD in the Sociology of Religions from the University of California, Santa Barbara, a Master of Theological Studies from Harvard University, and a Master of Fine Arts from the University of Iowa, where he was named the Truman Capote Fellow in Fiction. An Adjunct Senior Fellow at the Council on Foreign Relations, he is also a member of the Los Angeles Institute for the Humanities and the Pacific Council on International Policy, and he serves on the boards of Chicago Theological Seminary, The Yale Humanist Community, Ploughshares Fund, Narrative Four, PEN USA, the Los Angeles Review of Books, and the Levantine Cultural Center.

Daniel C. Dennett is Co-Director of the Center for Cognitive Studies, and University Professor and Austin B. Fletcher Professor of Philosophy at Tufts University. Dennett’s acclaimed books include Breaking the Spell: Religion as a Natural Phenomenon, Freedom Evolves, Darwin's Dangerous Idea, Intuition Pumps and Other Tools for Thinking, Caught in the Pulpit: Leaving Belief Behind, and From Bacteria to Bach and Back: The Evolution of Minds. He is the author of over four hundred scholarly articles on various aspects on the mind, published in journals ranging from Artificial Intelligence and Behavioral and Brain Sciences to Poetics Today and The Journal of Aesthetics and Art Criticism.

Dennett holds a D.Phil. in philosophy from Oxford. He gave the John Locke Lectures at Oxford in 1983, the Gavin David Young Lectures at Adelaide, Australia, in 1985, and the Tanner Lecture at Michigan in 1986, among many others. He has received two Guggenheim Fellowships, a Fulbright Fellowship, and a Fellowship at the Center for Advanced Studies in Behavioral Science. He was elected to the American Academy of Arts and Sciences in 1987, and he is currently a member of the external faculty of the Santa Fe Institute and New College of the Humanities in London.

William Schweiker is the Edward L. Ryerson Distinguished Service Professor of Theological Ethics at the University of Chicago and an ordained minister in the United Methodist Church. Schweiker has written extensively on ethics and hermeneutical philosophy, and also theories of responsibility, religious identity, and the moral and religious complexity of our global information age.

Concerned with the origins of religion, in cultural and social processes as well evolutionary ones, Schweiker has also been keen to explore the potential of religious texts and practices to open up moral spaces for future action and human cooperation. In a word, the origin of religion need not determine its future evolution. These concerns have involved Schweiker in ongoing work on the relation of religion and morality's, past, present and possible future, as well as developing an intellectual and ethical stance called “Theological Humanism” that, on one hand, challenges the religions to live by their own most humane insights and thereby to engage in critical self-examination, and, on the other hand, critiques views of human life that impoverish the complexity of human existence. In this way, Schweiker seeks to be a person of reason and faith. His books include Mimetic Reflections: A Study in Hermeneutics, Theology and Ethics (1990); Responsibility and Christian Ethics (1995); Power, Value and Conviction: Theological Ethics in the Postmodern Age (1998); Theological Ethics and Global Dynamics: In the Time of Many Worlds (2004); Religion and the Human Future: An Essay in Theological Humanism (2008, with David E. Klemm); Dust that Breathes: Christian Faith and the New Humanisms (2010); and, forthcoming, Religious Ethics: Meaning and Method.

In 2014, Professor Schweiker was awarded an Honorary Doctorate from the University of Uppsala in Uppsala, Sweden. He was a Mercator Professor, Universität Heidelberg, Deutsche Forschungsgemeinschaft (2012-2013). He was the 2015–2016 President of the Society of Christian Ethics and the Director of The Enhancing Life Project (2014-2017), supported with a generous grant from the John Templeton Foundation.

David Nirenberg is Interim Dean of the Divinity School, Executive Vice Provost, and the Deborah R. and Edgar D. Jannotta Distinguished Service Professor of Medieval History and Social Thought at the University of Chicago. He holds an academic appointment in the College and six academic appointments across the Social Sciences and Humanities Divisions, as well as in the Divinity School, the John U. Nef Committee on Social Thought, the Department of History, the Department of Romance Languages and Literatures, the Center for Middle Eastern Studies, and the Center for Jewish Studies.

A prolific scholar, Nirenberg has focused his research on the ways in which Jewish, Christian, and Islamic societies have interacted with and thought about each other. He holds a doctorate in history from Princeton University and is the author of a number of books, including Communities of Violence: Persecution of Minorities in the Middle Ages, Judaism and Christian Art: Aesthetic Anxieties from the Catacombs to Colonialism, Race and Blood in the Iberian World, Anti-Judaism: The Western Tradition, Neighboring Faiths: Christianity, Islam, and Judaism in the Middle Ages and Today, and Aesthetic Theology and Its Enemies: Judaism in Christian Painting, Poetry, and Politics. Nirenberg is currently collaborating on a book exploring the relative claims of different forms of knowledge, in the hope of discovering new ways of understanding both the powers and the limits of the sciences and the humanities. He has written extensively on other subjects ranging from love to set theory, has authored numerous peer-reviewed publications, serves on many editorial boards and advisory panels, and has been a regular contributor to publications such as The Nation, The New Republic, and the London Review of Books.

Morris Fishbein Center for the Study of Science and Medicine

​Pearson Institute for the Study and Resolution of Global Conflicts

Division of the Humanities at the University of Chicago

Division of the Social Sciences at the University of Chicago

Spiritual Life at the University of Chicago